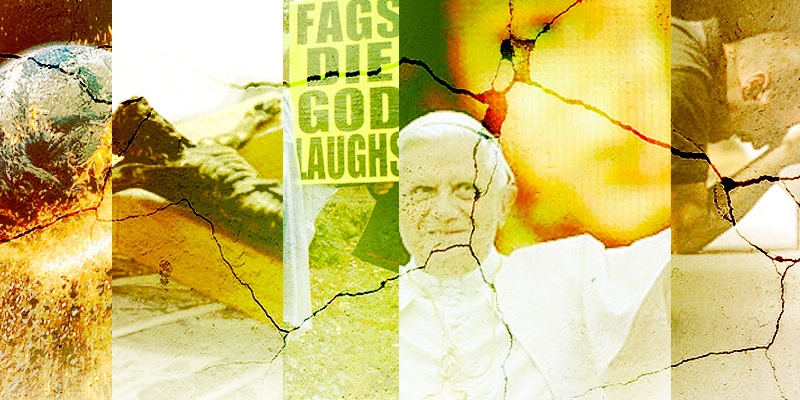 Today, I want to dig up a little controversy over some of the biggest misconceptions about Christianity that we see plaguing the minds of the 21st century. This is a major concern of mine, because for some, their perspective of the Bible or how they view Christians can be the basis on which they found their decision on whether or not they believe in God or fall away.

The first thing I want to tackle is something that, being a spokesman for the end of days, really gets under my skin, and it has to do with that kind of uninformed conclusion that Christians are somehow against the idea of world peace, contributing nothing to society, and are a bunch of doomsayers who just want to see the destruction of the world. I think what we have to first realize here is that anyone who thinks that God is some kind of peacemaker who determines salvation based on his naughty-or-nice list has maybe confused Him with our jolly ol’ reindeer-riding friend with the red suit. An interest in the end times does not stem from some sadistic impulse to witness the apocalyptic eradication of mankind, but rather hope of a corrupt world made new in the light of divine justice and liberation from the ancient curse of sin. Satan has stigmatized Christians by making everyone think that anyone who is opposed to the prosperity of this world is evil, but we fail to remember that the ruler of this world, as it refers to Satan in John 12:31, is not driving us to prosperity, but using global unification as a way to drive us farther away from God and closer in touch with humanism, the whole “we can do it ourselves, without God” way of thinking, which is in fact a very sly form of Satanism. This is how the followers of a religion founded on love suddenly became villains in the eyes of the public.

This takes me to my second point, which is the misconception that all Jesus wants is for you to be prosperous, happy, and successful in life, and any God that wants otherwise must be evil. However, Jesus didn’t say, “enjoy your life”. He said in Luke 9:23, “Whoever wants to be my disciple must deny themselves, take up their cross daily and follow me.” Does hauling a cross towards persecution and death sound like riding around in a new sports car? Jesus didn’t say, “get fat and make tons of money”. He said in Mark 10:24, “It is easier for a camel to go through the eye of a needle than for a rich man to enter the kingdom of God.” Revelation 12:11 calls the saints those who “loved not their lives unto the death”, not “those who lived lavish lives and showered themselves in luxury”. In Revelation 3:17, Jesus says, “You say, ‘I am rich; I have acquired wealth and do not need a thing.’ But you do not realize that you are wretched, pitiful, poor, blind and naked.” Jesus doesn’t care how much you invest in this life. He cares about how much you invest in Him.

It makes me sad that I even have to address this next issue as being an issue, but it is a major slander on God’s reputation and it’s leading thousands, even millions away from the faith, and that is the classification of Christians as “homophobes”. The initial reasoning behind this is in the Bible verse that calls homosexuality an “abomination to the Lord”, a sin. But, we need to consider the full context of the Bible when reading this. Lying is a sin. Gossiping is also a sin. In God’s eyes, sin is sin. There’s heaven and hell, not some in between place for the people who kind of loved God. Homosexual sex is the same as heterosexual sex if it’s not sanctified in marriage. God will not condemn a gay person for something that they have no control over, but choosing to fornicate is something that we do have control over. So, if a heterosexual can abstain from sex, so can a homosexual. It’s not the homosexual that God doesn’t like, it’s the homosexuality, the act, and God is calling all people, gay or straight, to abstain from indulging in fleshly appetites. Sadly, however, I find that many Christians throw hatred and scorn at gay people, and that’s wrong, that’s judgmental, and that’s not the spirit of God. Those Christians are tarnishing God’s name and we mustn’t look at them as role models, because they’re doing it all wrong and unknowingly condemning themselves in the process. Jesus wasn’t throwing rocks at the woman in John 8 for having fornicated and commit adultery. He refuted all those who were throwing stones at her, extended his hand, and helped her back to her feet with love and compassion. It doesn’t matter if you were born gay or straight. If you truly love Jesus, God will turn you into a new creation entirely. Luke 15:7 tells us that all of heaven rejoices for each new soul that’s saved, and if you can overcome the habits and urges that you were raised into, God will reward you a hundred times what you suffered to obey Him.

Another name that many have stamped onto Christianity is “pedophilia”, because of the pandemic of Catholic clergymen who sprang up all over the world in cases involving the rape of altar boys and other members of their congregation. Because Catholicism is the biggest and most notorious denomination of Christianity, most people look to it as the official model for Christianity, when it should be the exact opposite. Knowing that it is the most widespread, well-funded, and influential church in the world, Satan has used it to tarnish God’s name by branding an evil reputation into its history, detracting many who would then mistakenly perceive Christianity as some corrupt religious order that tortures people into converting to their belief and sexually abuses its children. We have to continuously bear in mind that, while church simply means “called out ones” from the root word ekklesia, the Roman Catholic Church has twisted God’s words and led us to believe that the spirit of God indwells solely within a sovereign city-state organization, not within us, as Romans 8:11 would contradict, “he who raised Christ from the dead will also give life to your mortal bodies because of His Spirit who lives in you.” It appoints the Pope as our intercessor to God, failing to recognize that Jesus Himself is our only mediator, as it also clearly says in 1 Timothy 2:5, “For there is one God and one mediator between God and mankind, the man Christ Jesus.”

When we see God’s name twisted, tarnished, and defiled by all sorts of corruptions, the first thing we think is, “Christians are such hypocrites.” Sadly, in many cases, this is not entirely a misconception, but it is a mistake to think that the erring of a few paint an accurate picture of the belief as a whole. John 1:5 says, “The light shines in the darkness, but the darkness has not understood it.” I think that this is the prime reason that many see Christians as being self-righteous or delusional maniacs that like to think of themselves as perfect luminous beings. The misconception here is the definition of what it means to be a Christian. Being a Christian doesn’t mean that you see yourself as an angel. It means that you see yourself as a sinner, because it is the Holy Spirit’s job to convict us of our sins, not to make us perfect, but to realize that we are so very imperfect and in unequivocal need of a savior. The difference then between the faithful and the faithless is not a matter of righteousness, but realization.